Now is the time to make decisions for the trucks shows of 2022. This year the ATHS National show and the ATCA National Show are back to back. That doesn’t leave much breathing room. Which one will you attend? Both? None? I’m not sure I’ll be making it to the land of Lincoln but Macungie is just down the road…..

Here is a great mystery truck for all you rail fans and truck fans alike. Hugh shot this photo back in 1978 at the D&H railyard in Whitehall, NY. What make a truck do you figure this to be? Clearly is Caterpillar powered but the badge on the hood is a mystery. I was quite surprised to find very few shots of the truck online as foamers are usually great at documenting every aspect of railroading. What do you think it is? 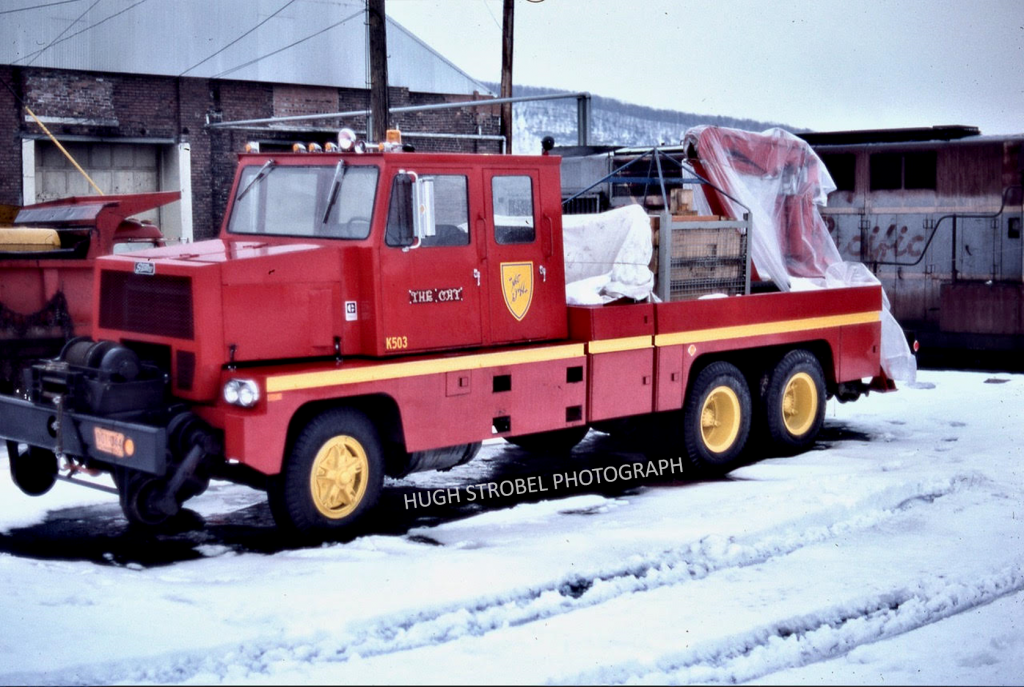 Auction of the Past

Here is a little tire kicking I did back in November. Of course I gravitated to a super clean International 4900. Only I could geek out over factory fresh floormats and pristine late 90’s door panels. Don’t worry. I found some other trucks too. 😉

One is good. Two is great. Three is better. Four is amazing. Five is other worldly. For the first post of the new year I bring you a video made of clips from the year past.

Here is the train of thoughts that lead to this Google Maps Discovery.

That’s right, you too can now visit the famous Midway Islands. I was very surprised to see a very extensive trail of street view photos on this island covering nearly every major section of the former Navy base. While much of the larger infrastructure is various states of decay there is still an active US Fish and Wildlife presence on the island. There appears to be an active runway with two crash trucks, a power plant, maintenance shops, and millions of birds. You can even see the Officer-In-Charge house that President Nixon used to secretly meet South Vietnamese President Nguyen Van Thieu in 1969.

But I digress. If you visit the islands browse just east of the sea plane hanger near the large man made harbor. From above it will look like nothing but broken concrete but dropping to street view you can view the island boneyard collection. 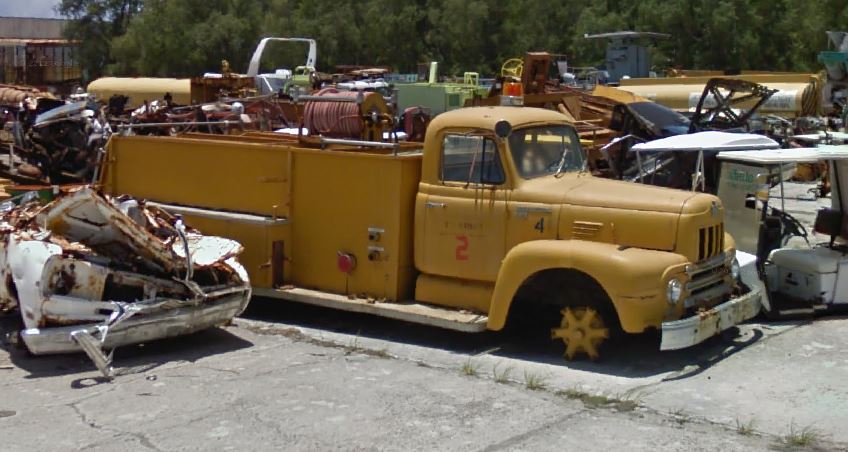 Look at this neat old R-Series International fire truck. And what about this Mack mixer truck. Looking closely in the background there appears to be a Peterbilt with hood removed. Possible narrow nose? 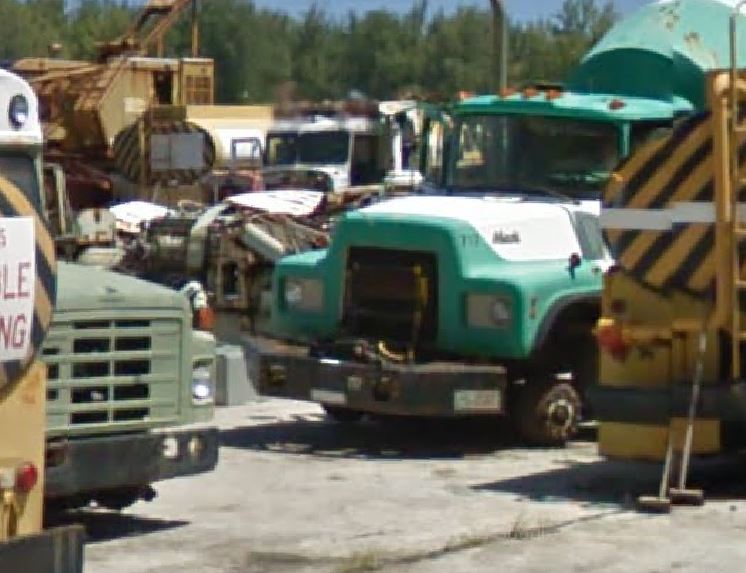 Plenty of heavy equipment and square bodies too!

What Was. What Is.

When a new truck like the Western Star 49X hits the market I typically don’t expect to see a cash strapped municipality like the City of Syracuse with one let alone three but that’s exactly what they have. 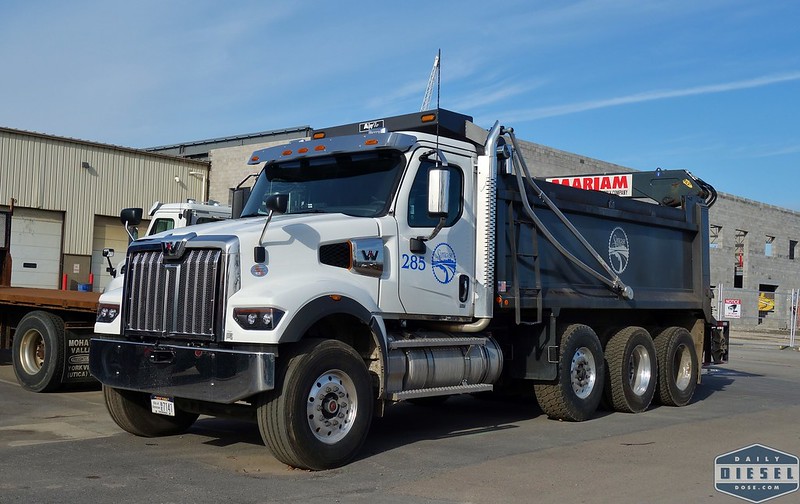 Here is the brand new 285 of the SDPW fleet. Previously 285 was worn by an AWD International Paystar 5000 single axle as seen below.

And here is the new 283. And just like 285 it replaced another International Paystar. 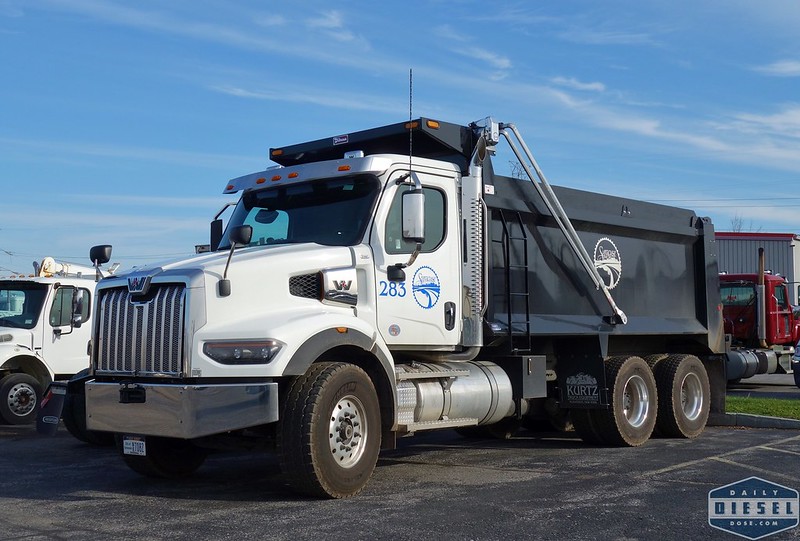 It didn’t occur to me until after that 283 is a SBA configuration. Below, the old 283 pushing snow for the Vohl blower to attack. 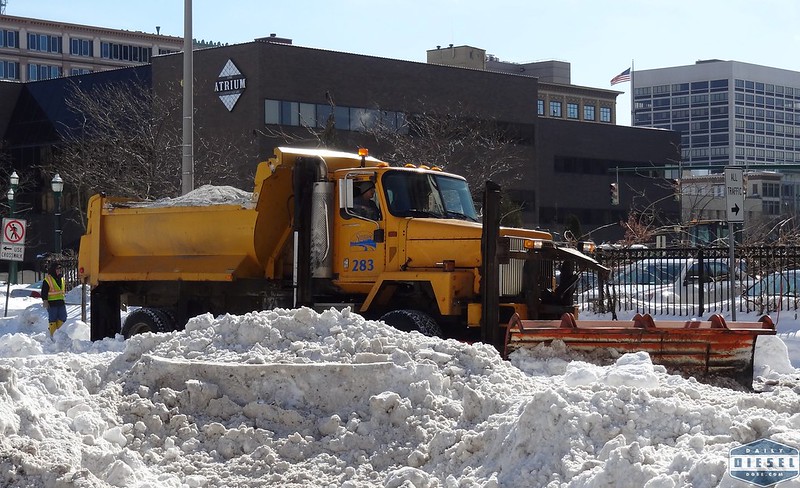 Well, I think you know my thoughts on the matter when it comes to what trucks I wish were still part of the fleet. 😉

Have you ever heard of Superior Truck and Tractor Manufacturing Company? I certainly never had and apparently neither has Google. My buddy Dave shot this photo at a Ritchie Brothers auction in Maryland last month as proof that the company did indeed exist at one point. 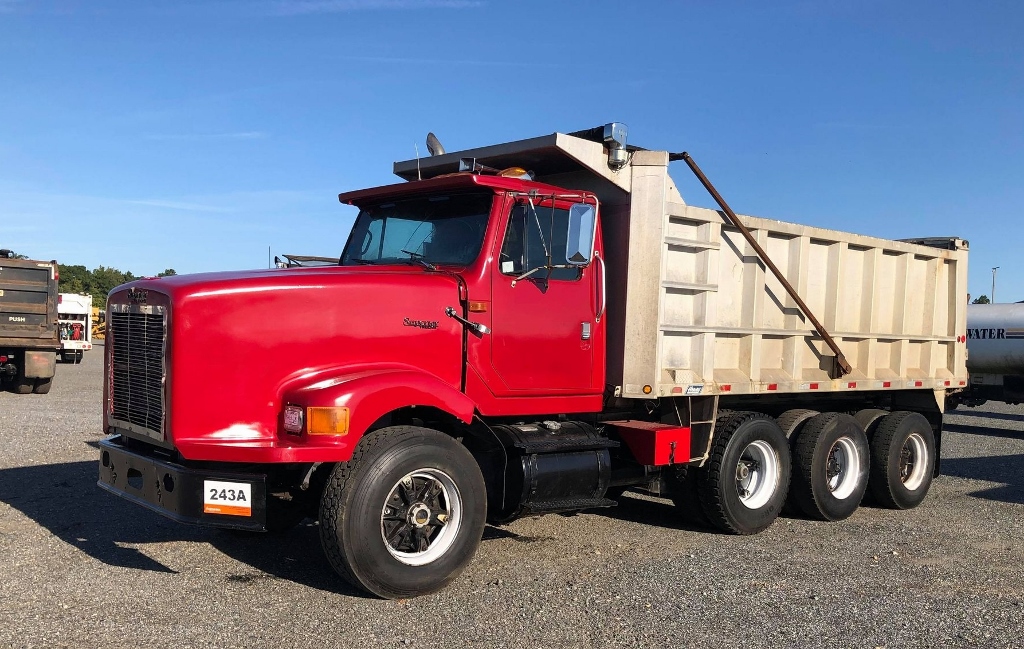 At first glance I thought I was looking at a Hendrickson from the final years the company made trucks but then you notice the badging on the side and the front. 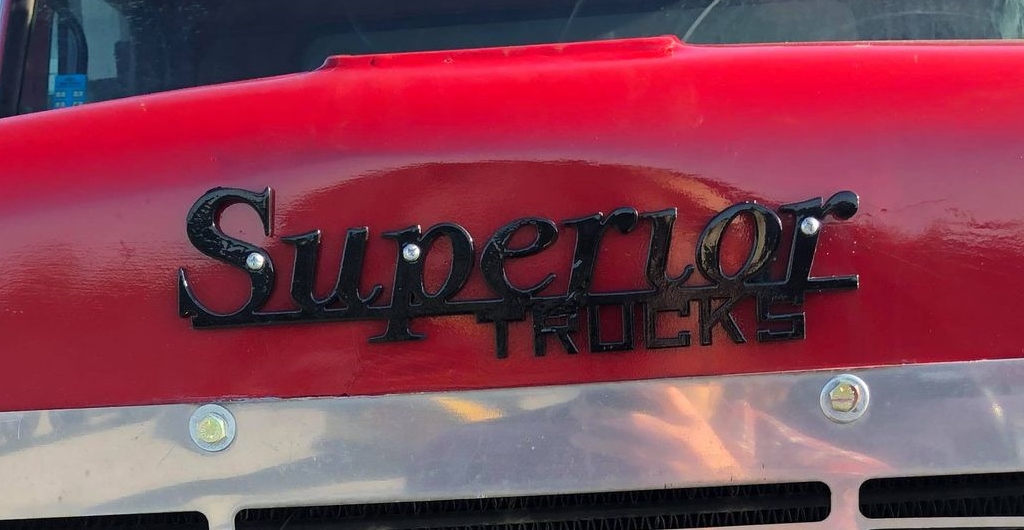 Clearly the truck cab is based on the venerable International S-Series. As with previous International cabs like the Comfo-Vision, the S Series cab provided a starting pointing for many niche truck companies including Hendrickson and the last incarnations of Diamond-T. 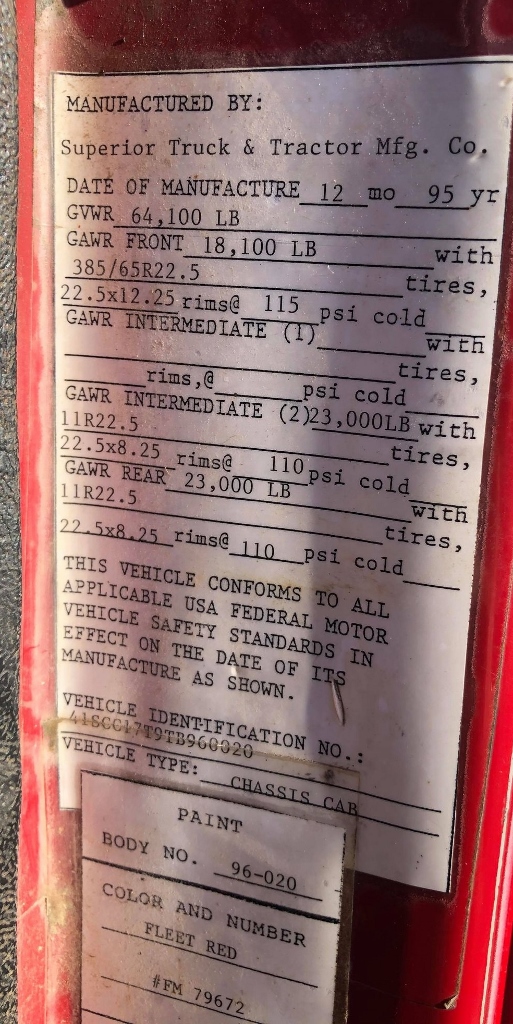 Very unique find! If you know anything about this company please leave a comment below!

Just a short distance from the endless parking lots of the Magic Kingdom at Walt Disney World you will find the Car Care Center. The CCC is your traditional gas station and repair shop that is typically visited by exhausted parents and children that have consumed far too much sugar while being subjected to sensory overload. I have visited WDW dozen of times over the past twenty years and have always seen the same Florida sun baked International 4700 rollback parked on a grassy knoll of the CCC. From the very first time I spied this truck I wanted a picture but that always proved to be more of challenge than expected. When visiting Florida I usually don’t have a car plus the truck sits in a very unfriendly location for pedestrians. With each passing visit and year I figured that I had seen the truck for the final time but it was always there parked on its little hill watching the thousands upon thousands of visitors stream in and out of the park each day. On a recent visit last month I again saw my old friend and sadly assumed that its time had to be drawing to a close. At best this truck is 21 years old and will probably be phased out soon for an Chinese built electric powered robot operated tow truck. I said a silent goodbye as my bus passed by the CCC. Sadly for you the story doesn’t end there. The very next day while visiting Hollywood Studios the truck was there and in a near perfect spot for a photograph! Fellow visitors glanced in confusion as I snapped a photo in a sweltering parking lot while acres of carefully manufactured fun designed to be photographed laid just around the corner. My family never even stopped walking as they have grown used to this type of behavior. 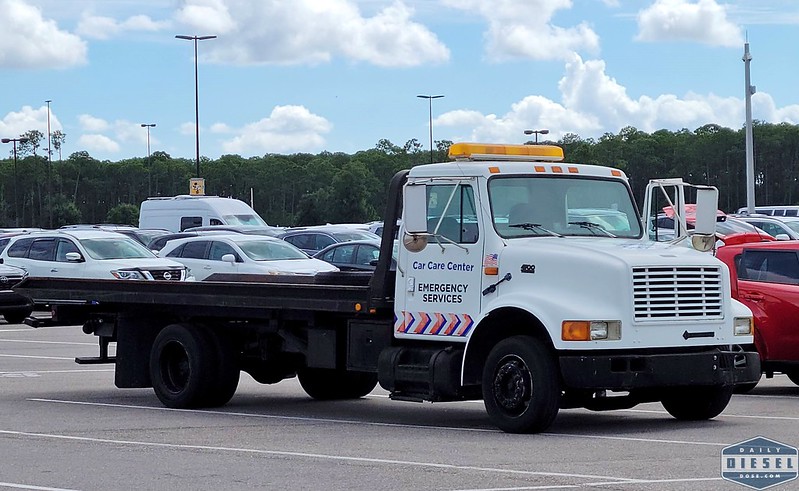 On the final day of our trip we again passed by the Car Care Center. I expected to see my old friend on the hill but it wasn’t there. Mostly likely it was out on a call but I couldn’t help but think I had just caught a glimpse of the future.

Who ever thought you could write 367 words about an International 4700 and not have it be sales related!?

The Truck Show that Wasn’t

A little over a month ago I set out for the 2021 ATCA Northeastern PA Endless Mountain truck show on a rainy Sunday morning. I made it a little more than halfway when I had to turn for a minor family emergency. On the way back home I stopped for a few seconds at USA body in Deruyter, NY. USA Body specializes in ag truck setups so of course there were Internationals. 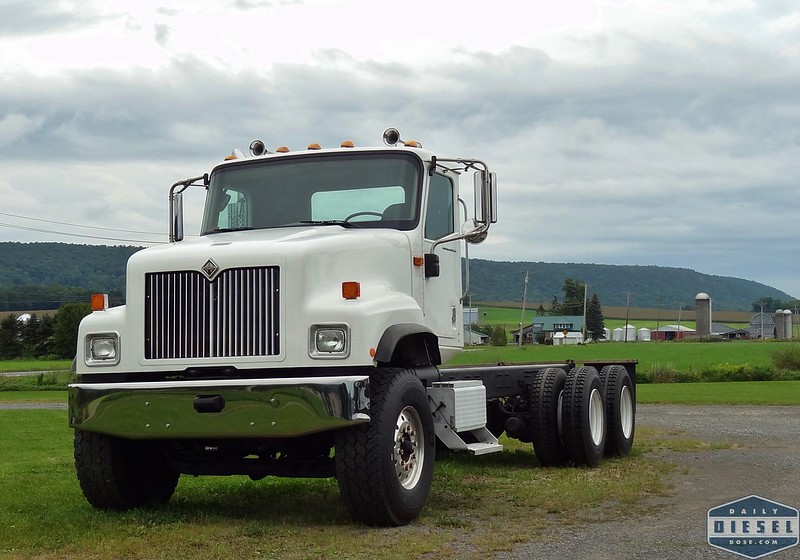 Take a look at this Paystar. Where has this thing been hiding over the past decade to appear virtually brand new?! Keep in mind that this style of Paystar ended right around the same time the Cat CT660 arrived on the scene in 2011. The International truck factory in Garland, Texas that produced the Paystar switched over to Cat trucks production. While officially still available during the early days of the Cat truck you hardly ever found a new Paystar available on dealer lots or anywhere else. They model returned briefly when the Caterpillar gave up on their truck line but never in noticeable numbers and usually only in a SBA form. It’s quite possible this truck is a decade old. It looks pretty darn good! 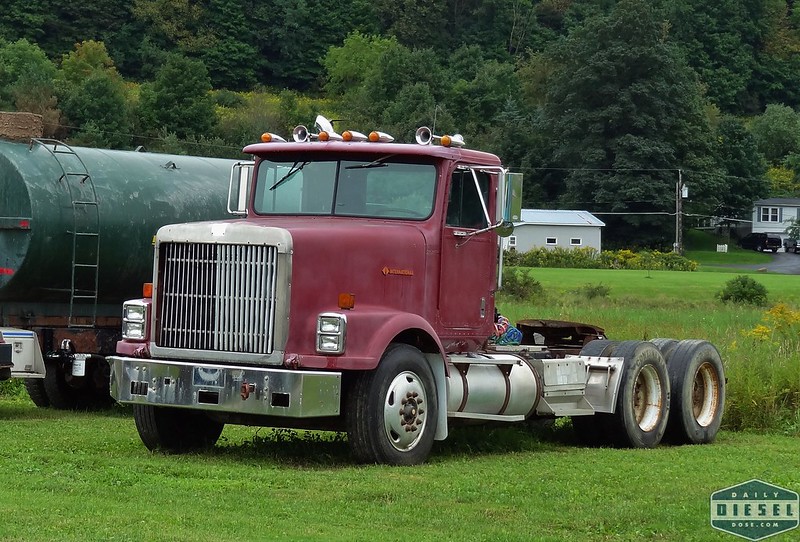 And here is nearly the same truck in a non SBA format. 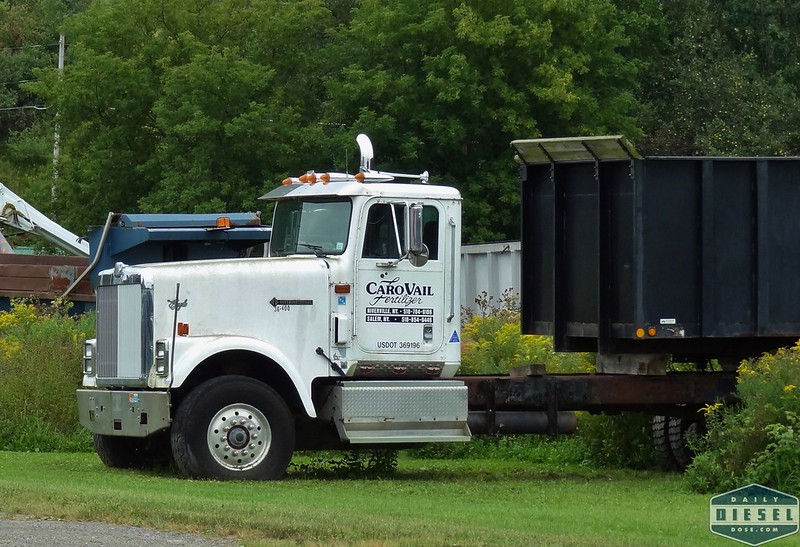